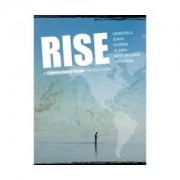 In 2008, Confluence Films debuted DRIFT, a highly acclaimed documentary that captivated the flyfishing community. In 2009, riding on the success of DRIFT, director/cinematographer Chris Patterson of Warren Miller Entertainment and executive producer Jim Klug once again set out in search of new locations and the totally unique stories, characters and species that epitomize the spirit and soul of flyfishing.

This new film is RISE – a collection of individual stories shot around the world; stories that together truly reflect the attraction that flyfishing has for all of us. Shot on location in the Florida Keys, Argentina, Idaho, New Orleans, Venezuela, and Alaska. RISE is a stunning feature-length film, photographed entirely on 16mm film and mastered in HD.