“She begins as a trickle near Dundalk, then dallies for a time above the Shand Dam before charging down through the Elora Gorge. This is classic brown trout water, some of the best found anywhere in Ontario.

Below that, smallmouth bass and pike call her deepening pools and riffles their home, and farther south still she changes again, enticing walleye and rainbow from the rich waters of Lake Erie.” * 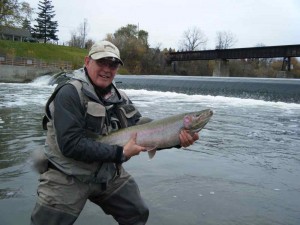 Andy with a Grand River Steelhead in Caledonia.

In 1994, the Grand River and its major tributaries achieved the coveted status of Canadian Heritage River. Due in large part to the successful efforts of many partners, the Grand is also considered a world class fishery!

Trico Hatch on the Grand river with TFC Hat

Grand River Brown Trout are known for their selective nature as fishing pressure has taught them to use discretion in feeding.

It is quite an accomplishment to catch and release a 20″ fish though plenty abound!

Major Hatches on the Upper Grand River extend all through the season from May through to October but the river is known for heavy Caddis, Midges, Hendrickson, Cahill, Fox, Blue Winged Olive, Isonychia and Tricos. 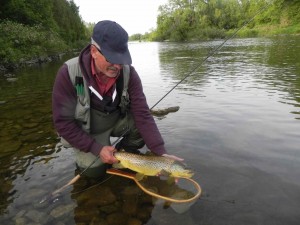 Vince on the Grand River with a Beautiful Brown Trout

Due to COVID 19 please practice social distancing if you choose to go fishing.  Important be aware that access points and fishing restrictions may have been put in place by local municipalities or land owners so respect any signs restricting access.

COVID-19 — restrictions and closures that could impact fishing and hunting