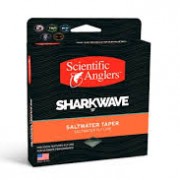 The Development of the SharkWave

When we introduced the Sharkskin™ family of lines in 2007, they weren’t simply the latest in a long line of high-quality innovations. The Sharkskin created an entirely new category of product: textured fly lines. These lines, developed and manufactured at the Scientific Anglers facility in Midland, Michigan, represented one of the most interesting and groundbreaking evolutions in the history of fly line technology.

The benefits of the textured lines were numerous: increased surface area allowed the lines to sit higher in the water, offering less drag, easier mending, less water spray, and easier pick-ups; the micro-textured surface trapped air to provide increases in both shootability and flotation—all while decreasing friction; and the microreplicated pattern increased the durability of the lines, allowing them to last up to twice as long.

The accolades mounted. But we knew we could do better.

Using what we learned while developing the Sharkskin, we developed the Mastery Textured series. These lines took the high points of the Sharkskin technology and combined them with the easy feel of traditional, smooth fly lines, resulting in a textured line that performs like the Sharkskin, but feels smoother to the touch.

Then something struck us: Let’s take the best parts of the Sharkskin, combine it with the Mastery Textured series, and see what happens.