You are here: Home1 / Events2 / Learn to Euro Nymph with Arron Varga3

The course is 4 hours on the river where he will cover:

*** It is recommended you take the czech nymphing course before the Euro nymphing course so that you have developed some of the basic skills for fishing with long rods and without strike indicators.

Arron will be using a Sage ESN Fly Rod and the new RIO Freshwater Euro Nymphing Line during the lesson.

See here for Arron’s most Past Related Guest Presenter Session. 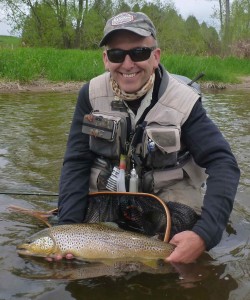 Arron on the Grand River with a Brown Trout while Czech / Euro Nymphing.