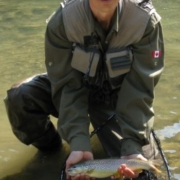 I am a software quality engineer for a major bank (that’s where the money are…right?!).

I have been fishing for over 40 years and fly-fishing in competitions for about 30.