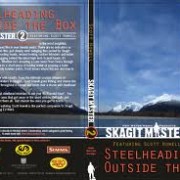 120 Mins. Filmed in 720 HD. Available in standard definition only.

Filmed in BC and Oregon, “Steelheading Outside The Box” is the most insightful, technique focused steelhead film in over a 25 years. There are no indicators or dead drifted nymphs in this film, just deeply sunk swinging flies, jacked by Skagit Flight and Skagit Short shooting heads, wicked looking custom Intruders and water spitting popping bugs chugging behind the latest high tech Scandi heads. It’s steelheading Scott’s way. Whether he’s dropping a cone head Prom Dress through 10 feet of cold winter flow to a short piece of holding water or popping a foam lipped Ska-opper over a roily boulder patch, Scott knows where fish live and how to make them to respond.

Few “How To” films deliver the goods. From the intimate coastal streams of Northern BC to his home waters in Oregon, Scott Howell goes fishing and shares the techniques he developed throughout is career and lands over a dozen wild steelhead in the process.

Scott’s philosophy is, “If that steelhead intended to eat your fly, it would have”. You shouldn’t worry about the ones that got away or the short strikes, dull pulls and plucks. Enjoy and respect them all. But cherish the ones you get to touch.